Now that Terraform has taken care of standing up a single instance of EC2 and RDS/MariaDB in Part 1, the next part is pretty straight forward because we just need docker & docker-compose installed on our web server EC2 instance.

Just a reminder of the simple setup we're trying to build here: 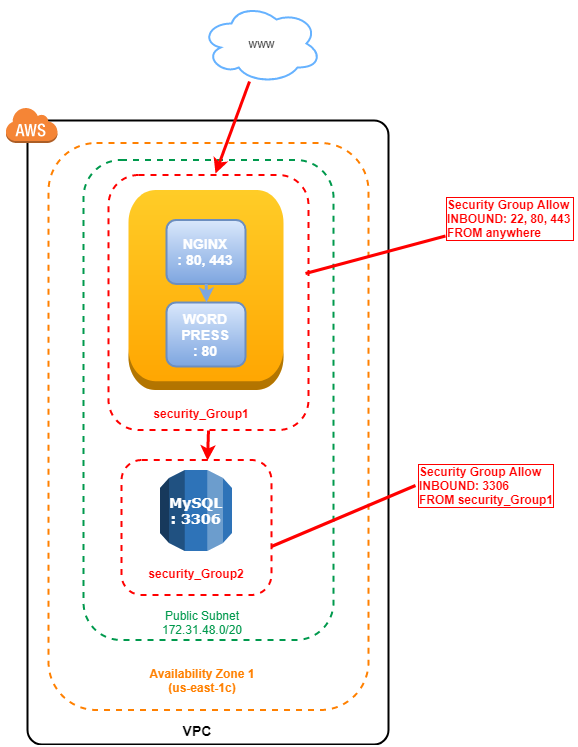 All we're after here is for ansible to install docker & docker-compose on the target server. We could've done this with a user_data section of our Terraform build so the new instance would come fully formed with docker & docker-compose. But again, even though this is a small and really simple setup, I wanted to practice structuring and implementing things in a scalable "industry standard" sort of way (well, close to anyway).

all your defaults go into this for ansible to pick up and work with when you run ansible or ansible-playbook.

self explanatory, or you can read and add as required, read this page: ansible.cfg example on github.com

there's a couple ways to layout your hosts file, the ini way:

or the way I've decided to go, with YAML, the "ungrouped" way (per github inventory yaml example)

there's a few other ways to lay your inventory out with YAML, adding 'vars' and 'children', but these are some great practices to follow on inventory in YAML format:

the role of 'roles'#

Now I'm no Ansible guru, but the more I'm learning about ansible the more powerful I see 'roles' being in terms of organizing the 'work' required to get from 'A' to 'B' for whatever you're trying to achieve.

In the example of this little project, we want docker & docker-compose installed.

where 'docker' is the role we want to create. There's a way to pull down an already filled out 'docker' role much the way you pull down docker images, but its fun to start from scratch and see everything at the boilerplate level.

You end up with this folder structure (I copied this from ansible's documentation):

Rather than get into an Ansible tutorial (which there are much better out there to learn from), let's just highlight the files that actually do stuff:

the main event, is tasks/main.yml. this is where docker and docker-compose get installed, and the docker service is enabled and started by this section:

That's it. Now its time to deploy

Pretty non-eventful after all the meat and potatoes of this is already done in the 'roles' section. The following just deploys our hard earned config setup:

Third and Final Part III, where we setup our Docker Wordpress site with RDS backend!